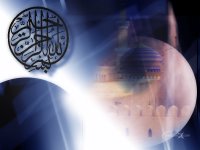 As narrated by Ibni-Abi-Dunya, Hazrat Muhammad(S) once approached a group of Sahabah (companions) who were sitting in silence. He asked them what they were thinking about. The Sahabah replied that they were pondering over the wonderful creations of Allah. Rasulullah (S) appreciated it and said, “Do not ever meditate over the ‘Self’ of Almighty Allah, (He is beyond comprehension), but do meditate over His creation.”

In this Hadith our Prophet(S) inspires us to ponder upon the wonderful creations of Allah, but forbids us to think about the ‘Self’ or the being of Allah, which means he forbids us to meditate on what is Allah like, because Allah is beyond human comprehension or understanding. Many of us have read the Hadith, but have we ever tried to understand why our Prophet(S) has forbidden us to think about the ‘Self’ of Allah, and why Allah is beyond human comprehension? Science tells us that Allah is indeed beyond comprehension. There is perfect scientific explanation for why we should not meditate on the being of Allah.

Atheists (those who don’t believe in God) raise many stupid questions about God, such as, ‘what was God doing before creating us?’, ‘what was before God?’, ‘who created God?’, ‘doesn’t God anything else to do but to look after us?’ etc. But we have to understand that these kinds of questions only come to our mind because we are bound by the 3 dimensions of space (the x, y, z coordinates) and the 4th dimension time and everything in our universe follows the laws of physics. So we can never imagine anything that is beyond the 4 dimensions (3 dimensions of space and time) and which doesn’t follow the rules of physics. That’s why whenever we depict aliens, we do make them look weird, but we do give them hands and feet! Everything in the universe we live in, are bound by these 4 dimensions and everything follows the laws of science. But does that mean the creator of the universe also is bound by these limitations?

Let me give you an easy example. Suppose you create a computer software using C++ language. In that program you make a section called ‘credits’. If the user of the software clicks on ‘credits’ the software displays the name of its creator. Which means the software knows that you created it. But does the software have the slightest of idea what kind of a being you are? Does it have any idea on the complex structure of human beings? Does it know about the cells in our body, our organs, the reactions that are running all the time inside us, how our brain works? In fact, the software doesn’t even have the idea of 3 dimensional space. It only understands 0 and 1. So how can humans, mere tiny creations of Allah, expect to understand what Allah is like?

Although materialists try to give many alternate theories of it, the Big Bang theory is accepted as the true theory of the beginning of the universe by most of the scientists. The Encarta Encyclopedia states: “Big Bang Theory, currently accepted explanation of the beginning of the universe. The big bang theory proposes that the universe was once extremely compact, dense, and hot. Some original event, a cosmic explosion called the big bang, occurred about 13.7 billion years ago, and the universe has since been expanding and cooling.” (Microsoft ® Encarta ® Reference Library 2005. © 1993-2004 Microsoft Corporation. All rights reserved.) The big bang theory says that at some time about 13.7 billion years ago, the universe was extremely dense and as small as a point in space. In that moment because of an original event, there was an explosion in that point and the whole universe started to expand at a great speed. Thus the universe as we see it today came into being, and the universe is still expanding. Yes, this theory is correct, in fact it is also supported by The Holy Quran. Allah says in the Quran:

Do those who disbelieve not see that the heavens and the earth were sewn together and then We unstitched them and that We made from water every living So thing? will they not believe? (Qur’an, 21:30)

During the late 1960s renowned physicist Stephen Hawking proved that a singularity must also have occurred at the big bang. A singularity is a point of infinite density and zero radius and most importantly, at a singularity all the laws of science and physics break down. At first, singularities were only thought to have occurred at the time when a star collapses into a black hole. But later in 1970 Stephen Hawking and his colleague Roger Penrose proved that if the general theory of relativity is correct, then there must have been a singularity at the big bang. That means the universe started from a point on which all the laws of science break down. So there is no possibility of understanding what happened before the big bang, and which also means that time had a beginning at the moment of big bang. The Encarta encyclopedia states supporting this: “Further, the big bang theory does not explain what existed before the big bang. It may be that time itself began at the big bang, so that it makes no sense to discuss what happened “before” the big bang.”(Microsoft ® Encarta ® Reference Library 2005. © 1993-2004 Microsoft Corporation. All rights reserved.) Now it is clear that Allah the Almighty Creator is beyond our laws of science and beyond space-time. So it is utterly insane to try to understand the ‘Self’ of Allah.

We can see now that there is perfect scientific explanation of why Allah is beyond our comprehension. It is simply because space-time and all the laws of science began with the big bang and Allah is beyond space-time and the laws of science. With proper knowledge of physics we can see that it is impossible for humans to understand Allah. But without these knowledge, if one continues to ponder upon what Allah is like, then it is highly possible that he might be mislead and he might start asking stupid questions like materialists and atheists. That’s why for all of us, it is extremely necessary to follow the guidance of our Prophet(S) that we should not try to think about what Allah is like, but we should always think about His wonderful creations and praise Him from the depth of our hearts.

Email ThisBlogThis!Share to TwitterShare to FacebookShare to Pinterest
Labels: Science